You are here: Home / Smart Home / Smart Wifi System / Anova Bluetooth Vs Anova Wifi : Which One You Should Buy ?

Anova has introduced two types of cookers in the market. They are automated and can be controlled by Anova Bluetooth or Anova WiFi. If you are considering buying one and are confused between the two models, then you have landed up at the right place. After doing thorough research and testing for 46 hours we have covered the difference between Anova Bluetooth Vs Anova Wifi. We have reviewed each and every specification of both the models in detail to help you find the one suiting your need. 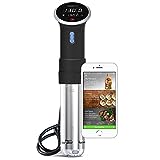 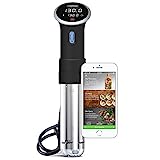 This is an cooking automation device that will work with your cooker and will help you control it even from a distance. So, now you don’t need to stand in the kitchen and keep staring at your cooker after a long day. You can relax in your home and cook food from your bedroom or living room.

Both Anova Sous Vide products are quite similar to each other. The cooking results also don’t vary much. The Anova WiFi/ Bluetooth is a great choice to save your time and for sous vide. If your budget is not very tight and packed, you should consider buying Anova WiFi. But if you have certain budget restrictions or you want to save money, you can always buy Anova Sous Vide Culinary (Bluetooth version). However, the main areas where you will feel the difference is the connectivity mode, as WiFi gives second-generation sous vide cooker an edge over its first-generation, and the quantity of the food as Anova WiFi has the capacity for around 12 people, in comparison to Anova Bluetooth which can only accumulate it for 8 people at maximum. The other differences like power input are easily avoidable.

Therefore, we can say that the Sous Vide Cooker WiFi+Bluetooth outnumbers the first version of Bluetooth in terms of the benefits. In the WiFi version, initially, you may find difficulty in connecting the network. Chill! We have got a hack for you in this too. If you avoid special characters and numbers in your WiFi password, Anova will connect in a second. Easy passwords will help you connect fast without any problem.

Overall, if you have quite a few smart home devices and you want to pair your Sous vide cooker with them or you want to move around the house or work while cooking Anova Sous Vide WiFi+Bluetooth is the option for you. And if you are on a tight budget and you are looking for something of standard quality for Sous vide cooking Anova Bluetooth Sous Vide cooker is the option for you. On the whole, both are great options it is your requirement that would decide what is good for you.[/su_note]

Both Bluetooth and WiFi models are different to each other in certain ways, some of which are listed below.

Since the Bluetooth connectivity only works to a certain distance, you have to be near your kitchen if you are working with Anova Bluetooth. However, Anova WiFi will give you the freedom of greater distances and still letting you to control your cooker.

Anova WiFi requires power of 900W as compared to Anova Bluetooth which needs 800W. This power difference allows to reduce the pre-heat time significantly (ranging from 5-15 minutes depending upon the dish) and can cook for upto 12 people, in contrast to 8 people in the case of Anova Bluetooth.

Both of these cookers give the power to you to control your cooker even from a distance with a very high degree of automation and precision. Both are very apt for day to day use which will help you to cut down your time in the kitchen.

Both of these models from Anova will let you to customise time and temperature according to your need and your dish, letting you take control as the master!

These cookers can be controlled with their app ‘Anova Culinary’ which can be installed on a smartphone and used for ease.

The device comes along with sous vide guides and recipe book which has over 1000 recipes of a variety of dishes. So now without spending much time in the kitchen, you can take all the credits of being a good cook.

5. Easy To Use And Clean

Simply attach the cooker onto the side of the pot and add water till the labelled mark. Drop your dish in a zip-lock pouch in the water and allow your food to cook. For easy cleaning, the parts are detachable and made of stainless steel.

One Pack Of Anova Wifi Or Anova Bluetooth Contains

1. How do I connect Anova to my WiFi?

Just enable your WiFi on your phone and connect it to the network. In Anova app, tap on the ‘Menu’ and you’ll see an option to connect. Simply tap on it and you are ready.

2. How do I connect to Anova Bluetooth?

Enable Bluetooth on your smart phone and tap on ‘Connect Anova’. Make sure that the settings on your phone match on the cooker and then you are ready to use it.

Just attach your Anova precision cooker to a pot and fill sufficient quantity of water. Pre-heat it and then tap on the ‘Play’ button.

4. What is the temperature range?

5. What is the capacity of tank?

The maximum tank capacity which is recommended is 4-5 gallons which is 15-19 litres.

6. What is the maximum timer?

The maximum timer can be set upto 99 hours. However, water level might go low after evaporation so it’s recommended to check it at intervals.

7. Will it work with slow internet connection?

Internet is just a connectivity method and does not affect the speed of operations.

8. In case of power cut, will it restore the settings?

No. For various reasons including security, the device will restart.

9. Does the water overflows?

No, it does not. Considering you have kept the water level near the marked line.

11. Does it vibrate and make sound?

It does but that is negligible. It you notice extensive vibration and sound; it might be because of low water level. In such case, fill the water level to the minimum mark on the cooker.

12. Is Ziplock okay or some special packet is required for cooking?

Ziplock is okay and works perfect. Just clamp it to the side of the container and you are ready to go.

13. How much time will it take to cook the steak?

It depends on various other factors like thickness of steak and temperature. However, 45 minutes-60 minutes will do.

Both the Anova Sous-vide are great options for faster and cooking with ease. They are entirely automatic and easy to use. The only difference is in their connectivity. It’s your personal choice what kind of connectivity you are looking for Anova Bluetooth or Anova WiFi. No matter which one you choose both of them guarantee faster and easier cooking ways.