You are here: Home / Smart Home / Fortress Vs Simplisafe: Which One To Buy?

When talking about home security, Do-It-Yourself smart home security has become quite popular nowadays. Fortress and Simplisafe are the two top-notch products available in the market. Almost every house possesses various intelligent devices, which have made our lives quite comfortable. In this article, we will help you find the right one by comparing Fortress and Simplisafe. 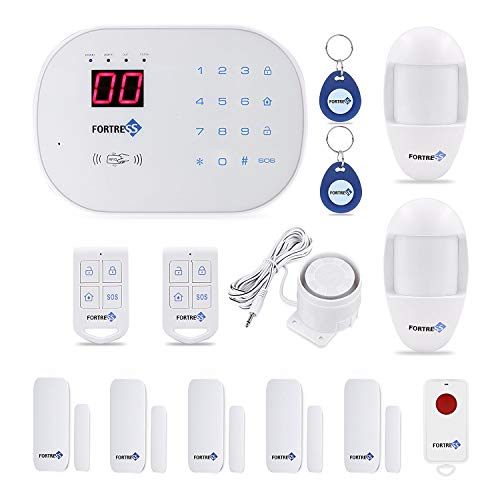 One of the critical aspects where both the devices prove to be quite different is Professional Monitoring. Where on the one hand, Simplisafe devices offer optional Professional monitoring, the Fortress model does not provide any such services.

This is another significant difference that can be found when we compare both the home security models. The Fortress security systems provide the facility of self-monitoring with the help of the Fortress App. However, on the other hand, the Simplisafe model does not include any such feature. Hence, the Fortress model takes the lead concerning this feature.

Another significant difference that must be kept in mind while choosing between the two is their Cellular Chip. With regards to the Simplisafe model, the cellular-chip is found already built-in in its system. Whereas, on the other side, the cellular chip is not built-in if we talk about the Fortress model. There is a requirement of SIM card for cellular communication in Fortress Home Security model.

This is another crucial difference between both models. When it comes to equipment selection, the Simplisafe model facilitates only one type of security system, which can support only a few devices and sensors. Whereas on the contrary, Fortress systems take the lead by offering up to three different types of security systems.

Both models are different in their methods of communication. Talking about Simplisafe, it uses Wi-Fi to communicate. While, on the other side, Fortress systems can use various means of communication such as landline, cellular signals, Wi-Fi, etc. for sending alerts.

This is an essential feature of any smart home device. When it comes to battery backup feature, both the intelligent home security devices differ between the two. The Fortress smart home security systems last longer than the Simplisafe model as its battery life ranges from 48 to 72 hours, depending upon the versions. Whereas, on the other hand, the Simplisafe devices are capable of providing a battery life of 24 hours only, hence making it less impressive in regard to this feature.

Another difference between both models is a subscription. The Simplisafe model offers two types of subscription: standard and interactive. On the other hand, the Fortress model does not provide any such subscription.

The first and the foremost common feature of bo0th the models is their installation process. Both of them follow the DIY installation criteria. Hence, in contrast to other high tech gadgets, these alarm systems are quite simple to install.

Another critical feature that can be found in both the products is that both of them are available online. Hence, there is no need to go out as these products are available at your service with just a press of a button.

Another feature that can be found in both models is that both the alarm systems provide wireless technology. Hence all you need is a good internet connection for these alarms to work efficiently.

Features and Technical Specifications of Fortress

Features And Technical Specifications of Simplisafe

Both the products enjoy top positions in the market. There is certainly no doubt that their unique features and impressive performance chart catch the eyes of every buyer. Along with the unique features, these products also consist of various accessories inside the box, making them more attractive
and desirable products in the market. A Simplisafe home security system comes with a wireless keypad, base unit, and windows and motion sensors. When we talk about Fortress security systems, it comes along with security sensors, base units, and smoke alarms too.

After discussing its various features, it can quickly be concluded that the Fortress model is quite reliable and durable and is one of the best DIY home automation systems in the market. It is capable of supporting Wi-Fi, landline or any other mobile devices. The users can avail the facility of professional monitoring or they can themselves monitor their houses. However, like any other device, it does have some pros and cons which are listed below.

The Simplisafe home automation system is, undoubtedly, the first home security system in the market. It excels in almost every feature and provides exceptional performances. These home security devices are installed to provide nationwide coverage. Their installation process is quite easy and simple. However, this product is also not free from the cons. The following are the various pros and cons of this model.

1. Can Simplisafe be jammed?

According to FCC filings, this system uses only a single frequency for its sensors. Therefore, a transmitter at the same rate as required to jam it. Hence, it can be quickly concluded that jamming a Simplisafe device is quite difficult.

2. Do we monthly contracts in Fortress?

Yes, it is necessary to pay for Fortress Security Systems if you are opting for a professional monitoring facility. However, payment can be avoided if it is needed for self-monitoring.

After studying every detail of both the models, it can be concluded that both the devices are amongst the top-notch products in the market. Hence, both of them are quite desirable in the market. The unique features, coupled with their capabilities, makes them quite high rated products. However, if we have to compare both, then we would recommend you to go for Simplisafe Home Security Systems. Simplisafe has proved to be a better product when it comes to guarding the house. They can provide numerous facilities to their users at a very minimal cost. Hence, when it comes to choosing between the two, we would prefer Simplisafe over Fortress.