Today Sous vide cooking is the easiest and the most convenient way to cook. With the advent in technology, there are lot of smart cooking devices in the market. Out of them, the most popular is the new immersion circulators. With this, the chefs can cook food easily in vacuum-sealed bags. Two of the best immersion circulators today are Anova Bluetooth + Wi-Fi and Nomiku.

We tested both these amazing tech cooking options for 10 days consistently to find out the best one. Let’s go through the major difference and features of the product to get an idea about what would suit you the best.

Both smart cookers are equally good. However, they have certain stark differences. Its difficult to say which one is better as they both offer different benefits that are equally important. Anova offers more smart features like remote control options through Wi-Fi or Bluetooth, app control and it is easily compatible with smart home controllers. It is also small and handy. Nomiku, on the other hand, offers very few additional features. It is also large in size and heavy. But Nomiku is more powerful with more quick and efficient that overpowers all the other features of Anova.

We would suggest you read all the features and differences between the products and then make up your mind about what would be the most suitable option for you. Either way, you will get home the latest and the most efficient cooking system.

In terms of heat power, Nomiku is a better product. Nomiku has more power and that is why its pre-heating process is faster as compared to Anova. The power of Nomiku is 1100 Watts while Anova is 900 Watts. While heating any food, Nomiku will take a shorter time than Anova.

Nomiku can only be switched to the U.S plug which is not a big issue for Americans. The outsiders need to order a compatible plug model beforehand to prevent any tension later. Anova, on the other hand, has a wider variety of compatibility with its plug compatibility with the U.S, U.K, Korea, EU, and AU.

Although it is not that of a big deal because everyone has a Wi-Fi connection in their home in case if your Wi-Fi goes down, Bluetooth can turn to be a savior. So, this is where Anova gets an edge.

When you attach a smart cooking system to your smart home controllers or voice assistants, it adds more convenience to your cooking. Anova offers support for Amazon Alexa and Google Home. Unfortunately, Nomiku does not support any of these voice assistants which can be its major drawback.

In the end, what matters is the things you find more convenient. If you find voice assistants to be important for your cooking system then Anova is the best product for you and if power and speed are more important to you then Nomiku should be your preference.

Anova and Nomiku both vary considerably in their designs while they both are clip to the pot devices.

Anova has a digital display to control temperature and remaining cooking time. You can control it both manually or through your phone. Further, it comes with a versatile clip to clip it to any container with sufficient depth.

While in Nomiku, there is a unique front-facing to hold it in the pot of at leas six inches height. Further, it has LCD screen with two buttons one for menu options and the other for the action button to select the options. To give the device an aesthetic look, there is a green  fluorescent trademark.

Both Anova and Nomiku offer manual control. You can easily operate the devices from their model itself and you do not have to rely on the apps everytime. This feature gives you more freedom and eases to use the product.

Both devices have remote control features via their apps. They both have their respective apps that you can easily download in both Android and iOS devices. Nomiku has a Tender app while Anova has Anova app.

Features And Technical Specifications Of Anova

Features And Technical Specifications Of Nomiku 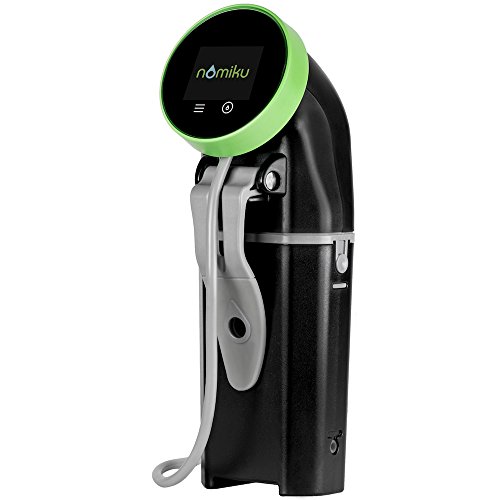 1. If my Wi-Fi is not working properly, can I still use both the products or not?

Both devices have the manual control options and therefore you can easily use them when your Wi-Fi connection goes down. You just need to be present at the time of cooking for manual control.

2. Can we cook a large quantity of food in one go in the Nomiku circulator? Is there any limit because of the bag?

We are a bit unsure of whether it can boil water because water boils at around 212 degrees at sea level while the maximum temperature on which it can boil is 203 degrees F.

4. Does the Anova device make any sound while it is on?

When you switch on your Anova device, it does not make any sound when it is working which is a great relief. It can make your cooking more peaceful and quiet.

5. If my power cuts off in the middle of the cooking, will my Anova device remember its last data once it is attached to power again?

In case if your power shuts off in the middle of your cooking process, your Anova device will lose all its previous information and you will have to reset the commands again when your power comes back. Your previous information would not be restored in the device and you will have to remember the required temperature and the current temperature that your pot had acquired.

We hope that after going through this post you have a clear mind of what you want to get for your kitchen. While both immersion ciruclators have their own pros and cons but both are a saviour went it comes to automatic fast cooking. Beleive us, buying any of it woul make your cooking easier convenient, and quicker.